Waiting for a Couple of Bits of Info

I am waiting for a couple of bits of info before I move ahead with more posts.

After discussing with my family as to how we came to possess the plate, there is a possibility that the plate did not come from my grandfather. Instead it may have come from a past co-worker who would buy collectible pig items for my daughter. I have tracked down this old friend and am waiting to hear from her.

Also, I am still waiting to hear from someone who may be able to provide background on the production of the plate. I want to make sure I have all of the cool facts before continuing with the story.

As a teaser, let me just say that the story of the planetary plate involves an amazing inventor, John F. Kennedy, Bob Hope, J. Edgar Hoover, and the country of Holland.

Oh, and did I mention that I now own two of these plates?

How Did I Get My Plate?

Well, the simple answer would be "from my grandfather". That concludes this post.

My grandfather, Edward Lee Tilton Jr., was a pretty amazing person. He was born in 1901 and died in 1993. He dropped out of school as a young man but went on to self teach himself. He was an electrician who worked in the WPA to build the New Orleans lakefront seawall. He also worked for Lykes Steamship company as a radio operator. He went on to be one of the best photographers in New Orleans and even had one of his photos on the cover of a LIFE magazine.

When he had his photo studio he had a guy apply for a job named Lee Harvey Oswald. Yep, that Lee Harvey. Oswald applied for a job just one week before he shot John F. Kennedy. My grandfather was interviewed extensively by the FBI and Secret Service after the assassination.

While a photographer he still found time to go to Vietnam during the war as a radio operator with the Merchant Marines. He was in his 60s! During his life he managed to travel around the world a dozen times. He even accompanied Admiral Richard Byrd on one of Antarctic expeditions. Because of his travels, he knew more about world history than anyone I have ever met.

Relevant to the plate, no one in the family can remember how it came to be in his possession. In fact, no one really remembers the plate at all. All I know is that when he died I somehow ended up with the plate.
Posted by Lee at 5:03 PM 3 comments: 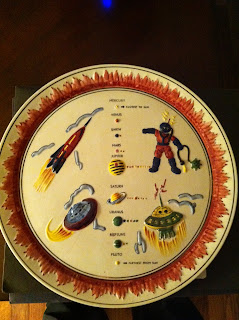 The purpose of this blog is to share the story of the Manning Planetary Plate, or spaceplate as some have come to call it. The man behind the plate was a fascinating character in Louisiana history and his life was as varied as the planets on the plate.

Visit this blog often as I post about the origin, history, mystery, and perhaps future of this cool piece of art.
Posted by Lee at 4:25 PM No comments: